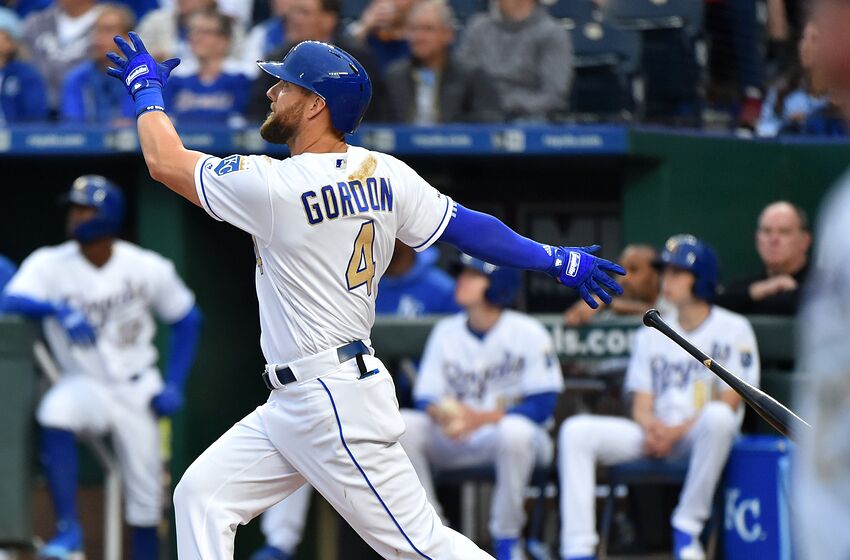 KANSAS CITY, MISSOURI - MAY 10: Alex Gordon #4 of the Kansas City Royals hits a two-run home run in the first inning against the Philadelphia Phillies at Kauffman Stadium on May 10, 2019 in Kansas City, Missouri. (Photo by Ed Zurga/Getty Images)

KC Chiefs: Winners and losers from Divisional Round vs Texans by Leigh Oleszczak
Kansas City Royals: Three reasons for optimism in 2020 by Gage Stagner

Royals rumors haven’t been aplenty this offseason, but one that has emerged is Alex Gordon potentially returning to the Kansas City Royals in 2020.

When the 2019 season ended in late September, Kansas City Royals fans thought that might be the end of Alex Gordon‘s Major League Baseball career, which began when he was called up in 2007. The former Nebraska Cornhusker spent his entire career with the Royals and did some amazing things for them during his time there.

After a very quiet offseason, it’s looking like Gordon might return for the 2020 season per Jeffrey Flanagan (see tweet below). If Gordon did opt to return this season, it would be his age 36 season.

It’s been up in the air on whether or not Gordon might return in 2020 and there were pros and cons for either situation. If he returned, he’s obviously not the same offensive player he once was, but he is still a very good defensive player, as indicated by his 2019 Gold Glove award – the seventh of his career.

The Royals are hoping to finalize a deal with Alex Gordon prior to FanFest.

Gordon inked the franchise’s largest contract prior to the 2016 season and failed to live up to the deal in the first three years, at least when it came to his offensive production. He had a much better season offensively in 2019, paving the way for him to potentially return to the team this year.

I’m on the fence about bringing Gordon back.

On the one hand, he’s an experienced Gold Glove winning left fielder who had a nice year offensively in 2019 as well. He showed he had more left in the tank and proved to still be a nice presence to have on the diamond.

On the other end of the spectrum, bringing Gordon back will limit other guys – some who could be a part of the future plans – from getting a chance to prove themselves.

Gordon would obviously be the starting left fielder, which would put Whit Merrifield in center field and Hunter Dozier potentially in right (Maikel Franco likely the every day third baseman and Jorge Soler could be the designated hitter). With those three likely getting the starts on most days, Brett Phillips and Bubba Starling wouldn’t be every day starters and it’s doubtful we’d get to see as much out of them as we’d like to in 2020.

Bringing Gordon back could mean that the Royals aren’t planning on Phillips or Starling being the answer in the outfield and this maybe gives the prospects another year to mold in the minor leagues before coming up to the majors.

Royals fans love Alex Gordon, so having him back would be fun in the sense that he’s provided us with some great memories. Is this the best move for the organization though? That remains to be seen.