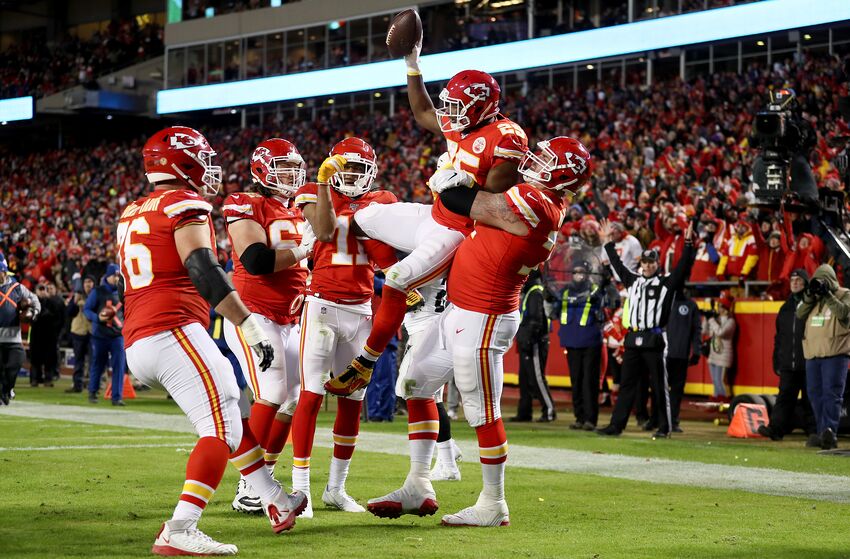 KANSAS CITY, MISSOURI - DECEMBER 01: LeSean McCoy #25 of the Kansas City Chiefs celebrates with his teammates after scoring a 3 yard touchdown during the third quarter in the game at Arrowhead Stadium on December 01, 2019 in Kansas City, Missouri. (Photo by Jamie Squire/Getty Images)

The Kansas City Chiefs could have lost the top spot in the AFC West, but fortunately for them, the Oakland Raiders forgot there was a game taking place on Sunday, losing 40-9.

There was a lot riding on this game for both the Kansas City Chiefs and Oakland Raiders, but clearly the Raiders didn’t think so. The Chiefs rolled the black and silver in this one, proving once again that they’re the best in the AFC West.

Things didn’t look so good for the Raiders from the start, as on the eighth play of their first offensive drive, Tyrann Mathieu picked off Derek Carr and set the Chiefs up on the Raiders 47 yard line. From there, the Chiefs marched right down and scored a touchdown, one that was scored by Darrel Williams.

The Raiders fumbled on their very next possession, but were able to stop KC on a fourth and one conversion. It looked like this might end up being a decent game after all, but nope. The Chiefs still steamrolled Oakland throughout.

Carr was picked again and finished the afternoon with just 222 yards, one touchdown, andtwo interceptions, but he didn’t throw the touchdown until the final minute of the game when the outcome had already been determined.

Carr continued to struggle against the Chiefs and is now 0-6 at Arrowhead in his career. How embarrassing.

As for the Chiefs, the title suggested that everything went right for them and it did. Patrick Mahomes didn’t have a great day, but he didn’t need to; He finished with 175 yards passing and a touchdown while also rushing for 25 yards and another touchdown.

Rookie Darwin Thompson led the Chiefs in rushing with 44 yards off of 11 carries and scored the first touchdown of his NFL career. Fans finally got to see Thompson get some carries, but it came via an injury to Darrel Williams, who had a receiving touchdown.

The defense, for all of their shortcomings this season, played incredibly well. They shut out the Raiders through the first three quarters and only ended up allowing nine points when all was said and done. They did allow a big game to rookie Josh Jacobs, but who hasn’t? He’s sensational and the Raiders still couldn’t do anything even with Jacobs’ performance.

Juan Thornhill had a really nice game and that was nice to see. He had the second interception off of Carr and took it back the other way for six points. Way to go!

Even special teams, which has seen its fair share of struggles this year, got in on the fun, taking an extra point back the other way for points. Harrison Butker also did his job, knocking through all five extra points and the lone field goal attempt asked of him.

The Raiders had a chance to come into Arrowhead Stadium and make a statement, but instead, they did what they always do and faltered big time. Carr and his eyeliner continued to struggle and the defense couldn’t keep KC out of the end zone.

Kansas City Chiefs: Predicting results of every game in 2019

With the win, the KC Chiefs sit at 8-4 on the year while the Raiders drop to 6-6. The Chiefs travel to Foxborough next week while Oakland hosts the Titans.