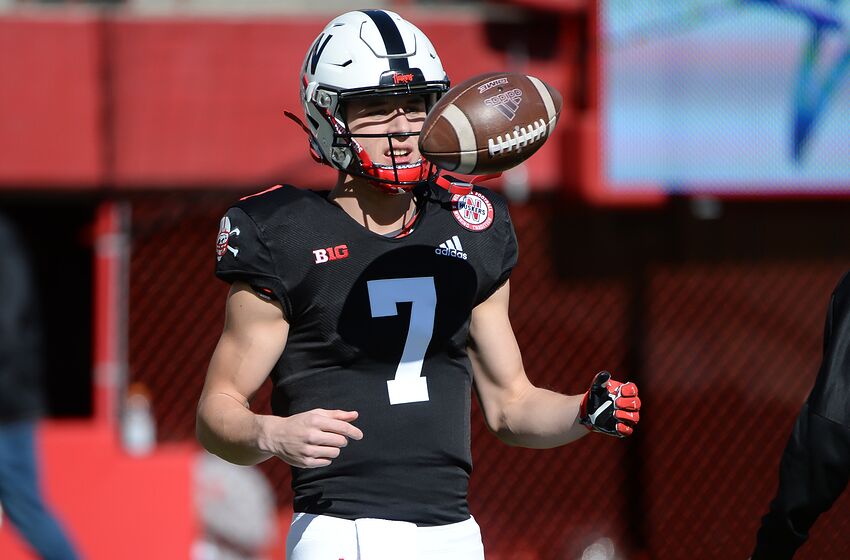 LINCOLN, NE - OCTOBER 26: Quarterback Luke McCaffrey #7 of the Nebraska Cornhuskers warms up before the game against the Indiana Hoosiers at Memorial Stadium on October 26, 2019 in Lincoln, Nebraska. (Photo by Steven Branscombe/Getty Images)

Nebraska football finished 2019 at 5-7, one win shy of qualifying for a bowl game. A big reason why they lost on Friday was because of the poor play of sophomore quarterback Adrian Martinez.

A lot can change in a year. This time last year, Nebraska football fans were RAVING about their then freshman quarterback Adrian Martinez, who had thrown for 2,617 yards, 17 touchdowns, and eight interceptions while rushing for 629 yards and another eight scores.

Martinez’s impressive freshman campaign made a lot of people, including yours truly, believe that he could vie for the Heisman Trophy in the 2019 season.

His rushing numbers were fine, but that was part of the problem, as he’d panic and try to run on every play. We saw that a lot on Friday, as Martinez only threw for 50 yards and would just break off and run even if there was no running room for him.

Now, we come to the awkward part of the conversation, and that’s how the Nebraska Cornhuskers need to open up the starting quarterback job this spring.

We saw on Friday how as soon as freshman Luke McCaffrey came in, the Huskers offense got the spark it needed. He threw for a touchdown shortly after being put in the game and finished 1 of 1 with that 39 yard touchdown pass.

Scott Frost decided to go back to Martinez after that much-needed spark and ultimately, it cost the Huskers the win and the opportunity to go to a bowl game.

McCaffrey played in four games as a true freshman, but didn’t get a ton of playing time due to Nebraska sticking with Martinez and Noah Vedral. By season’s end, McCaffrey completed nine of 12 passes for 142 yards and two touchdowns while rushing for 166 yards and another touchdown.

With McCaffrey showing potential this year and Martinez clearly regressing, it’d be smart for Nebraska to roll with McCaffrey next year. The problem, however, is that Frost clearly wants to stick with Martinez since that was his first big recruit and he showed that in the game on Friday. It cost this team a chance to become bowl eligible.

Hopefully Nebraska opens up the quarterback competition next year and picks the best option for the team to succeed in 2020. Adrian Martinez does not appear to be that guy anymore. Bring on Luke McCaffrey!