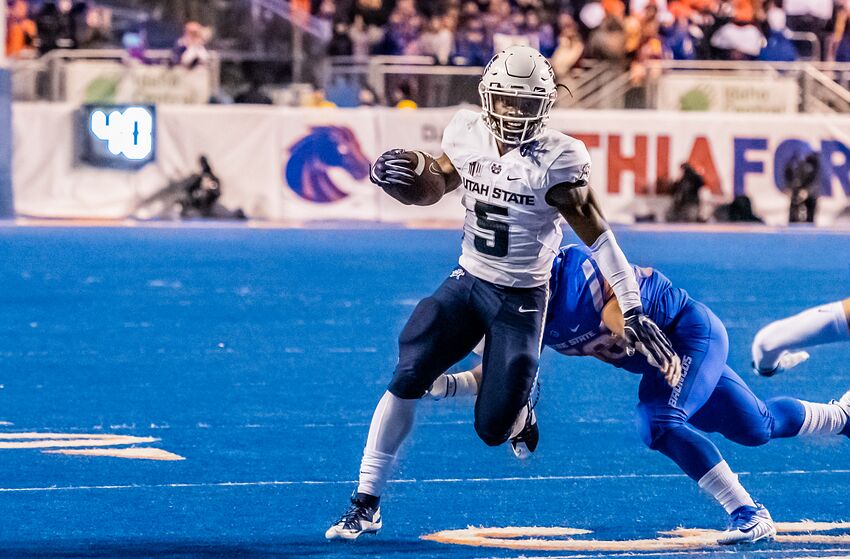 The Kansas City Chiefs only had three picks on the final day of the draft. One of the three was the last pick in the in the sixth round, number 214 overall. With the 214th overall pick the Chiefs selected running back Darwin Thompson.

Darwin Thompson played his college ball at Utah State where he amassed 1,044 rushing yards and 14 touchdowns last season, which was his only season with the Aggies. He added to his rushing totals with 354 receiving yards and two receiving touchdowns. He now joins the Kansas City Chiefs and could play a big role for them in the coming years.

Thompson will provide depth at the running back position for the Chiefs. He’s not the biggest running back in the draft at 5’8″ and 200 pounds, but he is a hard worker and can get yards through the air as well, which could help him get some playing time in the future.

The Chiefs didn’t HAVE to add a running back, but it’s a position where injuries occur a lot, so selecting one is probably fine for most Chiefs fans.

With the final pick of Round 6 and the 214th pick of the 2019 #NFLDraft – the Kansas City Chiefs select Utah State RB Darwin Thompson! pic.twitter.com/ugWudy6ZZl

As of now, the Chiefs have Damien Williams, Carlos Hyde, and Darryl Williams as their three running backs, but Thompson provides stealthy competition for them this summer.

Thompson comes from a “smaller” school in Utah State, but make no mistake. This kid can pack a punch and could very well make a dent in the Chiefs offense this year and beyond.

Thompson’s ability to make a play in the receiving game makes all too much sense, as Andy Reid loves running backs who can catch the ball. It’s not a big deal that he’s a sixth round pick because the running back position has changed and it’s easier to find depth much later on in the draft now.

What do you think of this pick, Chiefs fans?